… Sharply Decreased To A Descent Exceeding 5,000 Ft Per Minute

On November 9, 2022, about 0934 central standard time, a Piper PA46-500TP, N234PM, was destroyed when it was involved in an accident near Bignell, Nebraska. The pilot and passenger sustained fatal injuries. The airplane was operated as a Title 14 Code of Federal Regulations Part 91 business flight.

Postaccident examination of the accident site revealed the airplane impacted terrain on the bank of an irrigation reservoir. A postimpact fire partially consumed the airplane. The main wreckage, which consisted of the engine, fuselage, and empennage, came to rest within the initial impact area. Fragmented airplane structure was located within a 50 ft diameter of the main wreckage. The engine and propeller assembly were embedded in the terrain, followed by the cockpit, cabin, and empennage. The left and right wings came to rest adjacent to the main wreckage. The airplane’s flight instruments were destroyed by impact and thermal damage. The airplane’s landing gear and flaps were in the retracted position.

The National Weather Service had issued several AIRMETs (Airman’s Meteorological Information) that were current over the accident area to include instrument flight rules conditions due to low ceilings, low visibility with mist and fog, and low-level wind shear below 2,000 ft. There were no advisories that were current for icing or turbulence conditions. 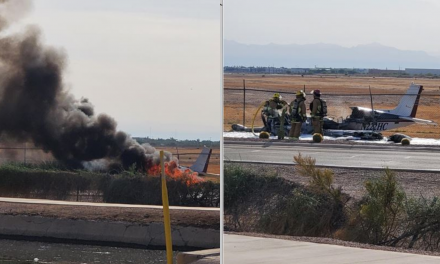