‘Veered Abruptly To The Right And It Exited The Runway Pavement’

On May 29, 2021, at 1451 central daylight time, a PZL Warszawa-Okecie PZL-104 airplane, N124MS, was substantially damaged when it was involved in an accident at the Pearland Regional Airport (LVJ), Pearland, Texas. The pilot was fatally injured; the passenger was seriously injured. The airplane was operated as a Title 14 Code of Federal Regulations Part 91 personal flight.

Automatic Dependent Surveillance – Broadcast (ADS-B) data indicated that the flight departed the Texas Gulf Coast Regional Airport (LBX) at 1406. The airplane proceeded east and overflew a portion of Galveston Island before it turned north to LVJ. The pilot entered a left downwind for runway 14 and completed a continuous left turn from downwind to final approach. The final ADS-B data point was recorded at 1451:00 as the airplane was on short final, about 51 ft from the runway arrival threshold.

The runway exhibited scuffing marks consistent with being formed by the main wheels beginning near the end of the touchdown (1,000-foot) markers. They proceeded in a righthand arc to the edge of the pavement and continued into the grass area adjacent to the runway. A small scuff mark began near the edge of the pavement and appeared consistent with being formed by the tail wheel. The tracks continued through the grass to the edge of the ditch running parallel to the runway. Ground impact marks were located on the opposite (rising embankment) side of the ditch in line with the tire marks. A second ground impact mark was located on the opposite side of the ditch immediately adjacent to the parallel taxiway.

The airplane came to rest upright oriented on a south heading. The engine was separated and located along the taxiway near the airframe. The two-blade, wooden propeller was fragmented. The forward fuselage was crushed aft and deformed downward consistent with impact to the ditch.

The main landing gear had collapsed. 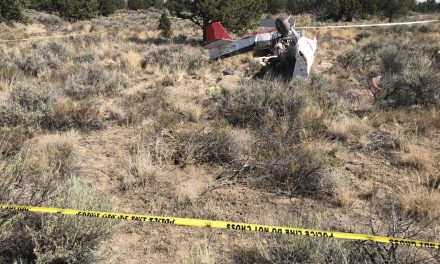