While Climbing Through 3,000 Ft… The Engine “Sputtered And Quit”

On August 14, 2020, about 1144 central daylight time, an experimental Siebel Auriga airplane, N505JS, was substantially damaged when it was involved in an accident near Rockford, Illinois. The pilot was not injured. The driver of an automobile sustained minor injuries. The airplane was operated as a Title 14 Code of Federal Regulations Part 91 personal flight.

The pilot report that he departed runway 18 at Cottonwood Airport (1C8), Rockford, Illinois, and continued north of the airport where he intended to monitor engine oil temperatures after making changes to the engine cowling to increase cooling. The pilot reported that while climbing through 3,000 ft, about 3-5 miles north of 1C8, the engine “sputtered and quit.” The pilot changed fuel tanks and turned on the auxiliary fuel pump but was unable to restore engine power. The pilot noted that the engine restarted a couple of times but it would lose power when he increased the engine throttle. The pilot then made a 180° course reversal to make a straight-in forced landing on runway 18 at 1C8. The pilot reported that he was high on final approach and performed a forward slip maneuver to lose additional
altitude. The pilot reported that the airplane landed about midfield, and that despite using maximum braking, the airplane overran the end of the runway, through the airport perimeter fence, and onto a street where it was struck by an automobile.

The engine was removed from the airplane and mounted in a test cell where it was run multiple times. The postaccident engine test runs did not identify any malfunctions or failures that would have precluded normal operation. The magnetos were correctly timed at 25° before top-dead-center. The engine-driven fuel pump functioned normally. The auxiliary fuel pump functioned, but the output pressure was below the engine manufacturer’s minimum specification. Additional examination of the airplane’s fuel tanks, fuel tank vents, fuel tank selector valve, fuel strainer assembly, P-leads, and ignition switch did not identify any anomalies or failures that would have precluded normal engine operation. The pilot reported that he departed on the flight with 45 gallons of fuel, and that he observed fuel leaking from the airplane following the accident. The pilot estimated that 25 gallons of fuel were drained from the airplane before it was recovered from the accident site. 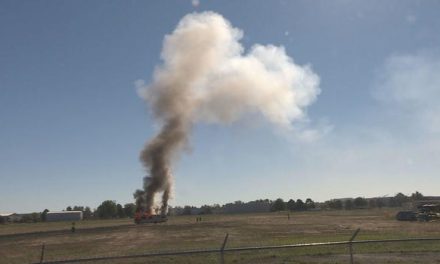 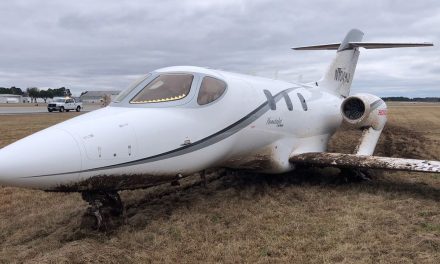