Witnesses Reported That They Observed The Airplane Break-Up Inflight

On November 18, 2022, at 1019 Pacific standard time, a Cessna 208B EX Caravan, N2069B, was substantially damaged when it was involved in an accident near Snohomish, Washington. All four occupants were fatally injured. The airplane was operated as a Title 14 Code of Federal Regulations Part 91 test flight.

The operator, Raisbeck Engineering, holds the Supplemental Type Certificate (STC) for an aerodynamic drag reduction system (DRS) on the Cessna 208B. The accident flight was part of the testing for Raisbeck to expand the applicability of that DRS to the Cessna 208B EX model. QuickSilver Aero was contracted to provide instrumentation support for Raisbeck’s flight test program. The airplane began flights to support the flight-test three days before the accident. The flights on the first day, consisting of three flights, totaled 1.1 hours and included a pilot familiarity-flight and a ferry flight to have the airplane’s weight and balance performed. Two days before the accident, the flight-test data-collection flights (establishing baseline data) began. Those included two flights, equating to 4.6 hours flight time, that were conducted to gather baseline data for both mid center-of-gravity (CG) cruise flight and forward CG stall speeds. The day prior to the accident, two test flights were performed with the accident test-pilot and the accident aft-seated testing personnel (different right-seated pilot). The first flight, totaling 1.2 hours, was testing aft CG static stability. The last flight that day ended short, totaling 1.4 hours, with only about half of the test plan (card) completed because an aft crewmember was feeling ill.

The purpose of the accident flight was to complete that test card from the day prior, which was baseline testing of the airplane’s aft CG stall characteristics. Witnesses reported that they observed the airplane break-up inflight and watched pieces floating down. The airplane then descended in a nose-low near-vertical corkscrew maneuver toward the ground. Several witnesses reported seeing a white plume of smoke when they observed the airplane break into pieces. A security camera recorded a low-quality image of the airplane rotating about its longitudinal axis in nose-low attitude.

A review of the preliminary radar track data indicated that after departing Renton, Washington around 0925, the airplane continued to the north. The airplane continued in a gradual climb to about 9,500 ft mean sea level (msl) and began a series of turns/maneuvers. The airplane proceeded for about 45 minutes varying in altitude between about 6,500 ft to 10,275 ft msl. At 1017 the track data indicated the airplane was climbing to an altitude of 9,700 ft msl and turning to the left.

The radar data further shows that the track made a near 360° turn and then at 1019:06, there was a sharp 180° left-turn. The track continued west until the last recorded hit at 1019:18. During the last 12 seconds the track indicated that the airplane’s descent rate exceeded 14,000 ft-per-minute (fpm) and gradually lessened to 8,700 fpm at the last hit. The main wreckage was located about 2,145 ft east of the last recorded track data.

The right-seat pilot that flew on the day prior to the accident reviewed that track data. He thought that just prior to the accident, they were likely at the second to last maneuver on the card which specified: 96 kts indicated airspeed; flaps in landing configuration; 930 ft-lbs of torque; propeller rpm fully forward; and accelerated 30° bank to the left.

The accident site was located in a grass field in the rural farmland of Snohomish, about 2 nautical miles east for Harvey Airfield. In character, the open field was wet from both east-west and north-south oriented canals. The elevation of the main wreckage was about at sea level. The wreckage was distributed over an approximate 1,830 ft distance on a median magnetic bearing of about 270°. The main wreckage and right wing were located at the beginning of the debris field and about 580 ft apart (see below Figure3). The main wreckage, consisting of the engine, cockpit (and cargo pod), cabin, vertical stabilizer, and rudder, was partially consumed by fire. The right-wing strut separated from the fuselage attachment point, but remained attached to the wing; the right flap was separated into numerous pieces and scattered among the debris field. The left-wing separated from the fuselage although was located adjacent to the main wreckage; the flap remained attached and was found in the retracted position. 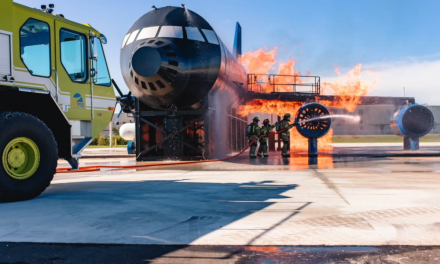