After Takeoff At 800 Ft Above Ground Level, The Engine Lost Power And The Pilot Attempted To Return

On July 1, 2021, about 1300 eastern daylight time, a Vans RV-7A, N654C, was destroyed when it was involved in an accident near Pottstown, Pennsylvania. The pilot was not injured. The airplane was operated as a Title 14 Code of Federal Regulations Part 91 personal flight.

According to the pilot, who was also the owner/builder of the experimental amateur-built airplane, a preflight inspection and engine run-up prior to takeoff were normal. During the initial climb after takeoff at 800 ft above ground level, the engine lost power and the pilot attempted to return to the airport; however, the airplane impacted terrain before the runway and a postcrash fire ensued. The pilot further reported that at the time of the accident the airplane had accrued about 3.9 total flight hours.

According to the Federal Aviation Administration inspector who responded to the accident site, only the outer portions of both wings and a portion of the tail were undamaged by the fire. The engine and cockpit sustained extensive fire damage. The electric ignition system, wiring harness, and fuel pumps were all fractured and melted. The airplane was equipped with a Subaru engine. The automotive fuel that the pilot used to fuel the airplane was stored in a bucket in the pilot’s hangar. It did not contain any water or other visible contaminates. 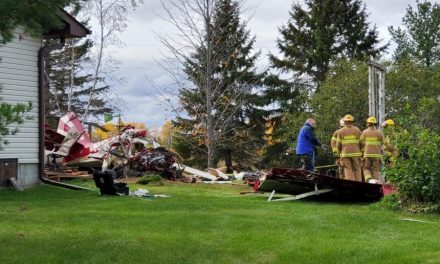