On May 1, 2022, about 1705 central daylight time, an experimental, amateur-built Van’s Aircraft RV-7A, N1218B, was substantially damaged when it was involved in an accident near Huntsville, Alabama. The pilot was seriously injured. The airplane was operated as a Title 14 Code of Federal Regulations Part 91 personal flight.

Review of preliminary Federal Aviation Administration (FAA) flight track data revealed that the airplane was first detected at 1328 shortly after departing McKinney National Airport (TKI), Dallas, Texas. The airplane climbed to an altitude of about 10,500 ft mean sea level and continued on an easterly course for about 2 hours and 48 minutes before the altitude, heading, and groundspeed began large deviations. The airplane circled right and left east of Huntsville for about 30 minutes before flying a low approach over runway 9 at Moontown Airport (3M5), Huntsville, Alabama. The airplane then made a left 180° turn and flew west about 8 miles before it turned back and descended again toward 3M5. The airplane impacted terrain about 200 yards short of runway 9.

Examination of the airplane by an FAA inspector revealed that the airplane came to rest inverted and sustained substantial damage to the wings, empennage, and fuselage. The airplane was retained for further examination. 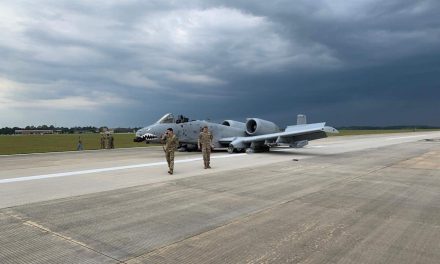 A-10 forced to make emergency belly landing at Moody AFB