On September 2, 2022, about 1100 Pacific daylight time, a Yakovlev Yak-11, N5943, was destroyed when it was involved in an accident near Shafter, California. The pilot was fatally injured. The airplane was operated as a Title 14 Code of Federal Regulations Part 91 personal flight.

A witness, who was part of the ground crew located at the Shafter-Minter Airport (MIT), Shafter, California, reported that the pilot initially departed runway 30, and entered a climbing left turn, with the intention of orbiting the airport. The witness stated that the pilot continued the left turn, until it was in an area consistent with a left downwind leg for runway 12.

Shortly after, the pilot radioed his ground crew who were monitoring the flight, that he had a low oil pressure indication, to which the ground crew instructed the pilot to land. The witness stated that about 3 to 5 seconds later, he heard 2 popping noises originate from the airplane followed by the sound of a loss of engine power. The airplane continued a left downwind and turned onto a base leg. As the airplane turned on to final for runway 12, it entered a nose-low, steep left bank attitude and descended rapidly into terrain. The final moments of the accident sequence were captured on video by a witness located near the approach end of runway 12. At the start of the recording, the airplane was observed in a descent in nose low, left-wing low attitude. The airplane began to roll to the right and pitched upward, until just prior to impact, when a slight left roll was observed. Throughout the video, the propeller was observed rotating.

Examination of the accident site revealed that the airplane impacted an open field on a heading of about 127° magnetic, about 3,777 ft northwest of the approach end of runway 12 at an elevation of 397 ft mean sea level (msl). The wreckage debris path was about 392 ft in length and 60 ft wide. The first identified point of contact (FIPC) with terrain was a large swath of freshly disturbed dirt, which extended about 32 ft to an impact crater that was about 17 ft wide and 32 ft long. Contained within the crater was 2 of the 4 propeller blades. The empennage separated from the fuselage and was located about 170 ft from the FIPC. The forward portion of the fuselage, which included the instrument panel, engine, and right wing, was located about 244 ft from the FIPC. All major structural components of the airplane were located within the debris path. 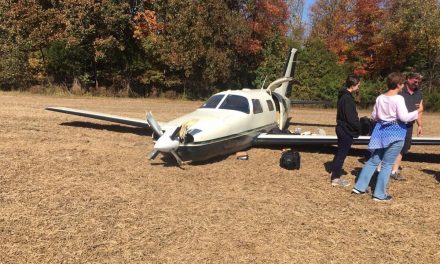