The National Transportation Safety Board (NTSB) final report on a fatal late-night rural northern Wisconsin helicopter EMS crash on April 26, 2018, indicates that the pilot was non-responsive before his ship rolled inverted, descended at 5,000 fpm, and hit terrain. The entire accident sequence lasted 12 seconds. Officially, the NTSB labeled the “defining event” of the crash as “loss of control in flight,” but its report suggests pilot fatigue might have been a contributing factor.

The NTSB did not find any causal aircraft anomalies with the 2006 Airbus Helicopters AS350 B2, N127LN, operated by Air Methods as “Spirit 2” for Ascension Wisconsin. Shortly after takeoff on the 160-nm, late-night repositioning flight from Madison, Wisconsin to a hospital heliport at Woodruff, Wisconsin (60WI), the pilot inquired if the two medical crewmembers were “alright back there.” One responded by inquiring if pilot Rico Caruso, 34, was “alright up there?” He answered, “Uh think so. Good enough to get us home at least.”

Caruso had returned to duty after a Florida vacation the day before. The last leg of that trip was a four-hour drive from Milwaukee to his home. Cellphone records indicate that the pilot was active multiple times between 7:25 a.m. and 8:57 p.m. local time on the day of the accident. Satellite tracking of the helicopter terminated at 10:43 p.m. local time.

Onboard Appareo flight recorder video shows the helicopter entering a progressively accelerating right bank at that time from an altitude of 2,280 feet msl and an airspeed of 126 knots. “The pilot’s body, right forearm, and right hand (which was holding the base of the cyclic grip) appeared to move along with the increased roll rate,” according to the NTSB. The roll then increased to more than 90 degrees right bank, continuing to 270 degrees with a pitch down attitude, and then continuing to 90 degrees left bank.

During the roll, the artificial horizon displayed inverted. Audio indicates high rotor rpm warning horn and that the medical crewmembers were unsuccessfully trying to establish verbal contact with the pilot. 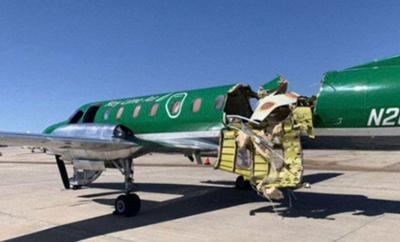