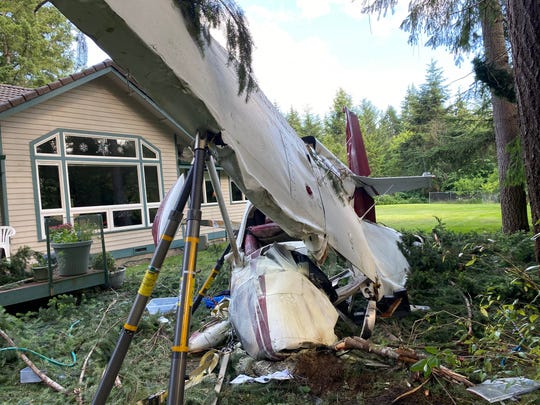 SOUTH KITSAP – A small plane crashed near a private airstrip off Mullenix Road Wednesday, falling to the ground just feet away from a home on Genesis Lane.

One patient, the pilot, had to be extricated from the plane and was flown with unknown injuries to a local trauma facility, said South Kitsap Fire and Rescue Lt. Laine Desilets. The crash occurred at about 4 p.m.

Sgt. Ken Dickinson with the Kitsap County Sheriff’s Office said when deputies arrived the plane was on fire and the pilot was still inside. A group of people were working to put out the flames by shoveling dirt and using fire extinguishers and water, he said.

“When we arrived here, we ran behind the house, found the airplane nosed in and numerous citizens were actively trying to extinguish the flames,” he said. “The front of the engine compartment of the plane was on fire and we could see that the pilot was actually still inside the airplane. We arrived to find several citizens working feverishly to get the fire out.”

Fire crews arrived a few minutes later and were able to extinguish the flames and pull the pilot out.

There was no indication that the plane struck the home, Dickinson said, estimating that it landed within 10 feet of the structure.

“They were very fortunate,” he said.

The Federal Aviation Administration, which will investigate the crash, had been notified, Dickinson said.

Witnesses on-scene said the pilot appeared to be attempting a “go-around” landing at the strip when his plane struck trees on the east side of the nearby Fraola Cemetery. The private strip is owned by the local homeowners association.

James Drew was working across the street on a roof when he saw the plane hit the trees and go down. He jumped off the scaffolding and ran over to the plane, where he attempted to get the man out and help as part of the initial group. Flames pushed him back. Eventually first responders arrived.

“There’s so many good neighbors around here,” he said. “The extent to which human beings will help each other out never ceases to amaze me.”

Neighbor MJ Dunlap was on the phone with his brother when he saw the plane flying at about 40 feet off the runway but didn’t land.

“I pretty much knew he was not going to make it out of here,” he said. “I told my brother, ‘We’re going to have a plane crash.’ I hung up, I jumped up and started running.”

The plane struck the trees about 60 to 70 feet up, he estimated, noting that limbs slowed the plane’s fall. He eventually sprayed the man with water from a hose in an attempt to soak him and put out the fire.

“’Help’s here, help’s on the way,'” he said, recalling what he said to the pilot trapped in the wreck. “‘Fire department’s been called, there is a fire, we’re going to protect you, stay with me.’” 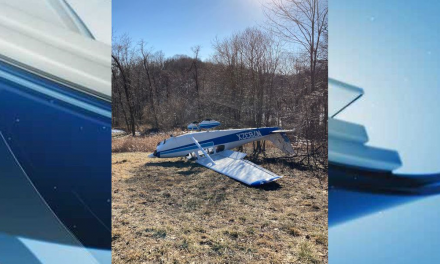 Pilot has minor injuries after small plane crash near Winchester