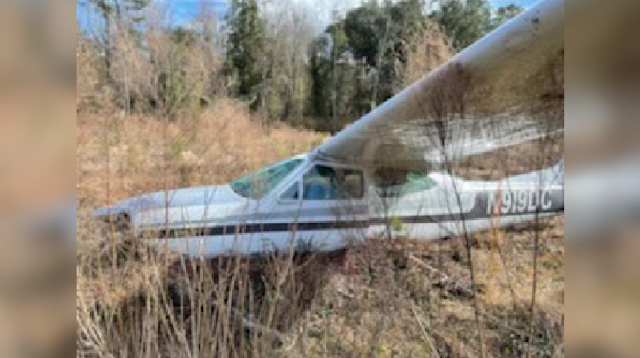 RICHMOND HILL, Ga. (WTOC) – A single engine plane had to make an emergency landing in Richmond Hill today after technical failures caused the engine to fail.

The pilot who was involved in today’s emergency landing said she was flying this plane home from Florida to Virginia when all of a sudden her engine gave out. Officials here say they were impressed she was able to make such a safe landing.

The sheriffs office says they received a 911 call from the Savannah Airport this afternoon reporting a small engine aircraft had gone down in south Bryan County. A spotter plane was able to locate the wreckage and a response was immediately sent out. The pilot, the only passenger in the plane, was able to locate the pine field and make an emergency landing despite not knowing the area.

“Something happened, of course, mid-flight, with the engine. The engine shut down on her and she was trying to find a safe place to land. So instead of it being a plane down it was an emergency landing, instead of a plane crash. You can see behind me where she was able to put the plane down in this pine field behind us and did a very good job of landing it,” said Bryan County Sheriff Mark Crowe.

The plane did suffer some minor damage and officials say they are unsure at this point whether or not it will be salvageable.

Officials say the pilot did not suffer any major injuries, just some cuts and bruises. She will be on her way home soon.