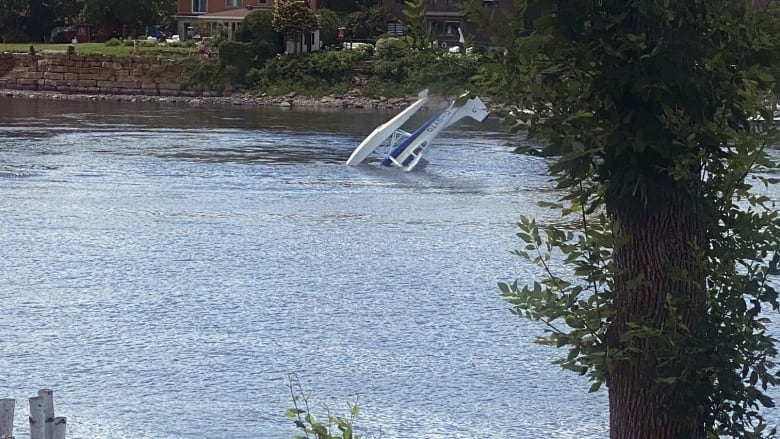 ‘It all happened so fast,’ says Lydia Aboulian who raced out to sinking plane on her personal watercraft

Lydia Aboulian was getting ready for another day of campaigning in Laval’s Sainte-Dorothée district with a volunteer on Wednesday morning when her efforts to win a council seat were interrupted by an unexpected noise.

“We both heard a loud plane sound,” said Aboulian, who was collecting some supplies in her kitchen at the time.

“We were kind of alarmed. We looked out the window and we saw this hydroplane dive into the water nose first and we saw it flip a couple of times.”

Then it started sinking into the Rivière des Prairies, a river that divides Montreal from Laval.

“It flipped onto its back,” she said, describing the plane’s pontoons as pointing up to the sky as it was carried downriver by the strong current.

Nobody was getting out of the plane, she said, and her volunteer was asking her what they should do.

Aboulian told her to call 911 and she ran out to her backyard where her personal watercraft — known by brand names such as Jet Ski and Sea-Doo — was docked.

She jumped onto the watercraft and gunned it out to the plane, she said.

“It all happened so fast, I felt like I got there in 30 seconds,” said Aboulian.

“I didn’t see any heads coming out. So I started panicking at this point, thinking ‘I’m going to have to go in there — dive into this water and see if I could get anyone out’ not knowing how many people are stranded inside this plane.”

‘I didn’t want to lose him’

Aboulian manoeuvred around the plane and she finally saw a head pop up out of the water.

It was an older man, she said, and she quickly asked him if he was OK and if there was anybody else in the plane.

When he said he wasn’t injured and there was nobody else, she instructed the man to swim toward her and get on the back of her watercraft.

“The current was really strong. I didn’t want to lose him,” she said.

She offered to take the man back to her place, but he declined, saying he would prefer to head home as he lives on the Montreal side of the river, she said.

So she took him home, they exchanged names and he bid her thanks before she headed off back across the waterway. She checked in with authorities who were just arriving on scene, told them there was nobody else on the plane and they headed off to check on the pilot.

Aboulian said she and her volunteer were shaken by the incident, but “there was a happy ending to this story. So I am really happy.”

Montreal police confirm the plane landed on the Montreal side of the river and the first 911 call came in at around 11:30 a.m. Police assisted the Transportation Safety Board of Canada (TSB) on the scene and the federal agency has since taken over the investigation into the crash.

TSB spokesperson Dean Campbell confirmed the agency is looking into the incident, but provided no other details.