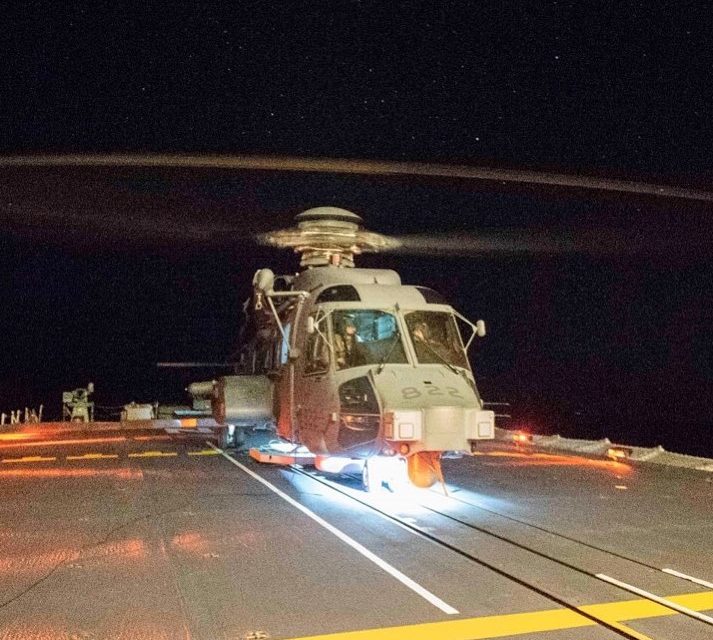 A Royal Canadian Air Force Cyclone helicopter is reported missing and the Canadian military says search and rescue operations have been launched.

Greek news outlets reported the helicopter crashed into the sea off the coast of Greece on Wednesday.

The Canadian Forces confirmed on a social media account Wednesday that there was a “developing situation regarding our CH-148 Cyclone, deployed onboard HMCS Fredericton.”

“Contact was lost with the aircraft as it was participating in Allied exercises off the coast of Greece,” it added in a tweet.

“Search and rescue efforts are currently underway,” the Twitter post noted. “As this is evolving, we have no further information to provide at this time.”

Greek news reports noted that the helicopter was a CH-124 which had taken off from a Canadian frigate and crashed into the sea some 20 nautical miles outside Greek territorial waters west of Kefalonia island. But Canadian military sources confirm the crash involved a Cyclone helicopter.

Between three and six passengers on the helicopter are reported missing by Greek news outlets. The helicopter was taking part in a naval exercise underway from Standing NATO Maritime Group 2. That group is the alliance’s maritime immediate reaction force. It is comprised of four to six destroyers and frigates.

NATO has launched a search and rescue operation for the helicopter crew and passengers.

HMCS Fredericton and its crew of 250 Canadian sailors and support staff left Halifax on Jan. 20 to take part in a six-month deployment in the Mediterranean Sea as part of Operation Reassurance. The frigate is equipped with a Cyclone helicopter from 12 Wing Shearwater.

As part of the NATO task force, the frigate is engaged in NATO’s defence efforts to assure central and eastern European countries that they are being supported in the face of aggression by Russian military forces and other threats in the region.

There was a large departure ceremony for HMCS Fredericton in Halifax involving families and relatives of the crew members. “The love and support of all the family members gathered here today is incredibly important,” Cdr Blair Brown, Fredericton’s Commanding Officer, is quoted in the navy newspaper The Trident. “I want to give a personal thank you to each and every one of them,” he added.

A twin-engine Cyclone helicopter usually has a crew of four, which includes two pilots, one tactical co-ordinator and one sensor operator, according to the Royal Canadian Air Force. But depending on its mission configuration, the aircraft could carry up to 22 individuals. The RCAF operates 28 Cyclones.

On Wednesday, on the frigate’s official Facebook account, the crew posted a photo of a crew member who is the bridge watchkeeper. On Tuesday, it put up a notice that the ship had “100 Days Down” on its mission. “Over 3 months ago, Fredericton left Halifax to join Standing NATO Maritime Group Two. For 100 days we have been Canada’s forward deployed unit, committed to our mission in the Mediterranean and Black Sea,” the Facebook post noted.

The ship’s commander, Blair Brown, had noted in a message to the family and friends how the crew would respond if a family member came down with the new coronavirus.

“We all appreciate that it is a difficult and very stressful time for our loved ones back home but please remember that supporting our members and our families during periods of critical illness is a priority for the CAF,” he explained.

“Notwithstanding the considerable world-wide travel restrictions and logistical difficulties associated with the repatriation for a member of our ship’s company while deployed, we will do our utmost to return to Canada any member of the ship’s company, required on compassionate grounds, when operations and the worldwide travel situation permits.

“While this would be an absolute priority for us, we would ask for your patience and understanding that depending upon where the ship is, this might not be an easy task and could take much longer than you would normally expect. We would do our very best.”