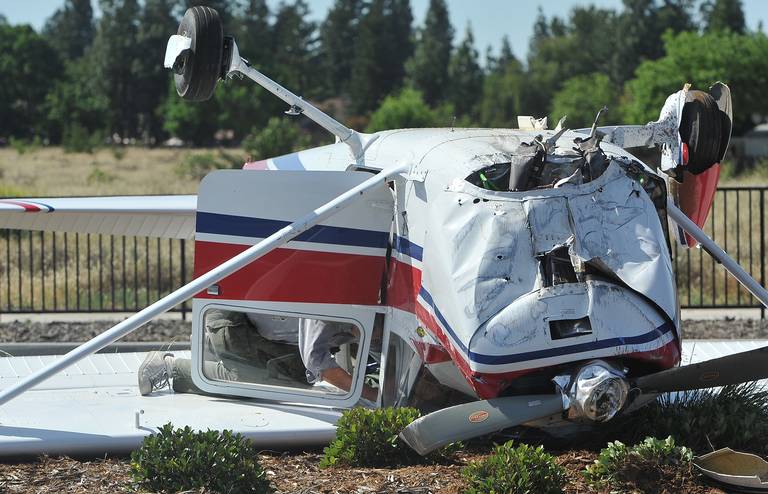 A small plane crashed through a fence and a pedestrian walkway Saturday in Fresno before landing on its roof in the center median of Herndon Avenue.

No drivers or pedestrians were hit and the pilot walked away with bumps and scratches.

Philip Barnett of Fresno, who has been flying for 46 years, took off alone in his Cessna 172 Skyhawk around 9:45 a.m. from the Sierra Sky Park Airport.

He took off going north into the wind, but his engine surged and then failed and he turned around, said Fresno Police Lt. Jennifer Horsford.

Barnett landed near the end of the runway, as skid marks demonstrated. But he said he had so much momentum, that he went past the edge of the runway, through the pedestrian walkway and crashed through a metal fence into Herndon Avenue, just west of Brawley Avenue.

“I was too high, too hot and too fast and had strong tailwind,” he said.

The four-seater flipped when the front wheel hit the curb and the plane landed on its roof in the median.

“I was lucky there was no cars,” said Barnett.

He had scratches on his hands and a bruised forehead but was otherwise fine. Barnett stuck around to talk to neighbors and others who gathered.