Small plane crashes near Blue Angels Elementary; teacher among 3 onboard 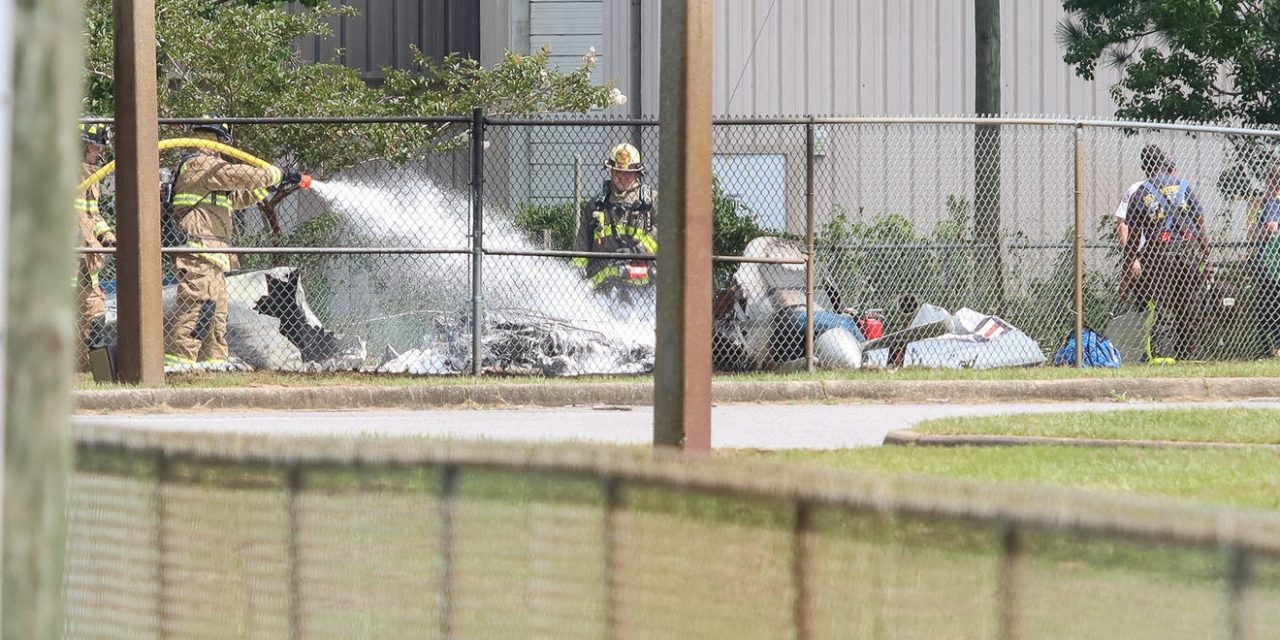 Three people were transported to the hospital after their small, single-engine plane crashed Thursday afternoon near Blue Angels Elementary School in Pensacola and then caught fire.

The names of those onboard the plane had not been released as of Thursday evening, but Escambia County School District Superintendent Tim Smith confirmed a teacher at Blue Angels Elementary, her spouse and their child were the three people on the plane.

“We just hope that they’re going to be OK and we’re thankful to have medical professionals to tend to them and they are definitely in our thoughts and prayers,” Smith said.

Escambia County spokeswoman Laura Coale said two of the people were transported from the scene in helicopters as trauma alerts. A third was transported to the hospital in an ambulance.

Their conditions had not been released as of Thursday evening. Escambia County Interim Public Safety Manager Eric Gilmore confirmed that as of 5:15 p.m. Thursday, all three remained alive but he did not have an update on their conditions.

No bystanders nor anyone at the school were injured in the crash, and there was no damage to buildings.

Authorities on Thursday credited several U.S. Navy students from nearby NAS Pensacola with helping rescue the people onboard, saying the students happened to be driving by the school when the crash happened and leaped into action.

Escambia County Fire Rescue Battalion Chief Steve Booth said the students worked together to pull the people out of the plane.

“I spoke with the first student who made it up to the burning plane,” Booth said. “He said as soon as it hit, it burst into flames.

Booth added, “God love those kids who stopped and pulled them out.”

Cause of crash unknown, FAA and NTSB investigating

In a written statement, the FAA identified the plane as a single-engine Navion 881AT.

“The FAA will release the tail number of the aircraft after investigators verify it at the accident site,” the statement said. “The NTSB will be in charge of the investigation and will provide additional updates. Neither agency identifies people involved in aircraft accidents.”

Escambia County authorities recorded the official time of the crash as 2:30 p.m.

The single-engine civilian plane touched down about 80 feet from the Blue Angels Elementary School main building, crashed into a school gate and came to rest near the campus’ main entrance before catching fire.

‘From the fuselage to the front was nothing but a fireball’

Booth was part of the first ECFR unit on scene at 2:36 p.m. and said the first thing he saw was that two-thirds of the front part of the plane was covered in flames.

“From the fuselage to the front was nothing but a fireball,” he said.

The battalion chief then noticed one of the Navy students tending to a person pulled from a plane, about 20 yards south of the burning wreckage.

Feeling the fire’s heat in the air, Booth said he could tell the heat waves were primarily flowing northward and away from where the person was receiving care, so he commanded firefighters to start extinguishing the fire.

Escambia County firefighters worked together with firefighters from NAS Pensacola to extinguish the fire using a firefighting foam. Water wouldn’t work because of the type of fuel in the plane, which Booth described as an ultra-high-octane aviation gasoline that burns incredibly fast.

In total, 14 Escambia County Fire Rescue units responded to the scene, along with seven total EMS units. Escambia County Sheriff’s Office deputies and Florida Highway Patrol troopers also could be seen near the crash site helping to secure the area.