70 Years ago today: On 14 January 1951 a National Airlines DC-4 overshot the runway on landing at Philadelphia (PHL), killing seven out of 28 occupants.

Narrative:
National Airlines Flight 83 departed Newark at 13:33 for Norfolk with a scheduled stop at Philadelphia. At 13:54 the flight reported over Northeast Philadelphia at 4,000 feet and was cleared by Approach Control to descend, crossing the Philadelphia range station at 3,000 feet. It was also advised that the altitude was unrestricted after passing the range station, and that it was cleared to make a straight-in approach to runway 09 With the above clearance, local weather was given precipitation ceiling 500 feet, sky obscured, visibility 1, 1/4 miles, snow and smoke, and wind south-southwest two miles per hour. Following this clearance, the flight descended and reported over the Philadelphia range station at 3,000 feet, was again cleared for an approach to runway 09, and was advised to report leaving thousand-foot levels. The flight acknowledged and reported leaving 3,000 feet at 14:04, but no report of leaving 2,000 feet was received by Approach Control. According to the captain, they then proceeded to the outer marker and executed a procedure turn. At 14:08 the flight reported over the outer marker, inbound, and stated that it was at 1,600 feet and descending. A clearance was immediately reissued to land on runway 09, and the wind was given as south-southwest, three miles per hour. The flight was advised that the glide path was inoperative, that a 2,000-foot extension to the west end of the runway was under construction, and that braking action on runway 09 was poor-to-fair. According to tower personnel this transmission was acknowledged. The crew, however, stated that they did not receive it. The flight continued its approach past the middle marker to the airport, and was first observed by ground witnesses beneath the overcast and directly over the intersection of runways 4/22 and 9/27, located approximately 1,200 feet east of the threshold of runway 09. The aircraft was next seen to descend steeply, flare out for a landing in a normal manner, and float a considerable distance After making contact with the runway the aircraft continued straight ahead, passed beyond the end of the runway, and crashed into a ditch at the east boundary of the airport. Fire immediately followed.

PROBABLE CAUSE: “The captain’s error in judgment in landing the aircraft too far down the slippery runway instead of executing a missed approach procedure.” 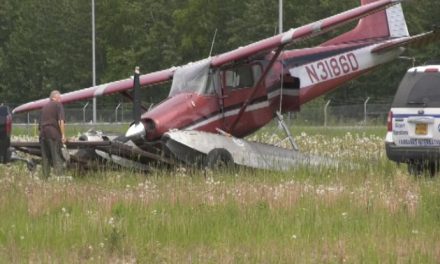 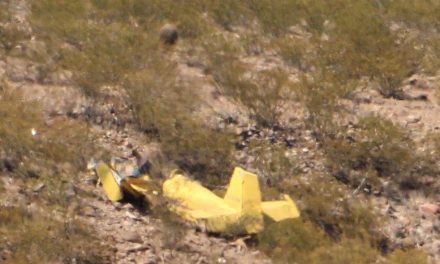