69 Years ago today: On 16 September 1953 an American Airlines Convair CV-240 suffered a CFIT accident on approach to Albany Airport in poor visibility, killing all 28 occupants.

Narrative:
American Airlines’ Flight 723 was a scheduled flight between Boston, and Chicago, with intermediate stops among which were Hartford (BDL), and Albany (ALB). The CV-240 arrived at Bradley Field at 06:57. Weather at the next stop, Albany, at this time was below the company’s landing minimums, but was forecast to improve to within limits by the time the flight arrived there. Departure from Bradley Field was made at 07:14. Because of poor visibility at Albany, several aircraft were in a holding pattern. The special Albany weather report issued at 07:50 indicated thin obscurement, ceiling estimated 4,000, overcast, fog, visibility 3/4 miles. Two aircraft left the holding pattern, attempted to land, but both executed a missed approach procedure. A third airplane landed at 08:16 following an instrument approach to runway 19. Immediately following this landing, Flight 723 was cleared to make an instrument approach to runway 19. Three minutes later the flight advised the tower that its approach was being abandoned because the aircraft’s flaps could not be lowered.
At 08:30 Albany Tower reported:”All aircraft holding Albany. It now appears to be pretty good for a contact approach from the west. It looks much better than to the north.” Flight 723 was then cleared for a contact approach to runway 10. On finals for runway 10, the Convair descended too low. The right wing of the aircraft struck the center tower of three radio towers at a point 308 feet above the ground. The left wing then struck the east tower. Seven feet of the outer panel of the right wing including the right aileron and control mechanism from the center hinge outboard together with 15 feet of the left outer wing panel and aileron separated from the aircraft at this time. Following the collision with the towers, ground impact occurred a distance of 1,590 feet beyond the tower last struck. First ground contact was made simultaneously by the nose and the left wing with the aircraft partially inverted.
The weather reported at the time of the accident was thin scattered clouds at, 500 feet, ceiling estimated 4500 feet, broken clouds, visibility 1-1/2 miles, fog.

PROBABLE CAUSE: “During the execution of a contact approach, and while manoeuvring for alignment with the runway to be used, descent was made to an altitude below obstructions partially obscured by fog in a local area of restricted visibility.” 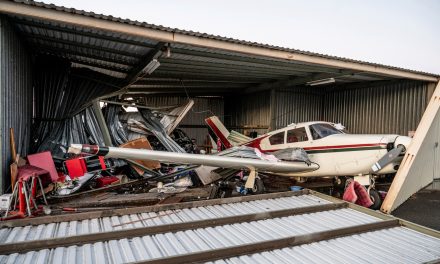 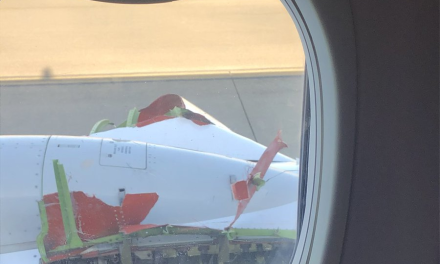