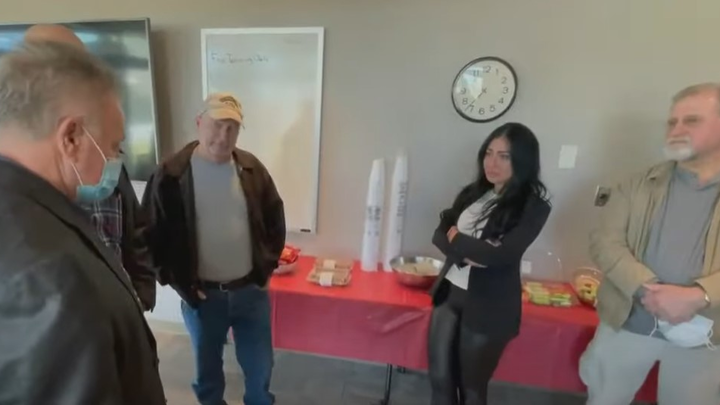 An emotional reunion brought together Smyrna firefighters and the woman they saved from a fire that erupted when a Navy plane crashed into an apartment complex in 1989.

SMYRNA, GA—On Nov. 9, 1989, a fighter jet crashed into an apartment complex in Smyrna, setting off a blaze that ultimately destroyed two buildings and killed two people.

Amid the inferno, Margie Padovani found her 5-year-old daughter, picked her up and ran through the fire and smoke, bringing her to safety, according to firefighters who were there that night.

Padovani became one of the two victims, dying a couple days later from smoke inhalation. But her daughter, Jaqueline, lived.

On Saturday, Jaqueline Luxenberg, having driven from her home in New York City, met the firefighters who had fought the blaze to thank them for their role in helping to save her life.

During an emotional reunion, Luxenburg and the firefighters embraced, wiped tears from their faces and shared their recollection of that November night 32 years ago.

Retired Smyrna Fire Department Lt. Sam Wehunt remembers the night well. It was his 36th birthday, and he sat down to watch the news after supper at the fire station when a couple colleagues grilling outside the station saw the plane go down in what they thought was the Rose Garden subdivision.

As they drove, dispatch called and said the plane had actually crashed in the Pine Village apartment complex off Roswell Road. At that point, Wehunt said, they could have found the crash by the plumes of smoke.

When they arrived, they found “a wall of flames 200 foot long and 200 foot high,” Wehunt said. In his 34 years of firefighting, it was “by far” the biggest fire he encountered.

The story identified the plane as a “single-engine, unarmed A-7E Corsair jet,” a “Navy Reserve fighter on a routine training mission” gone awry.

Although she was only 5 at the time, Luxenberg recalled the moments leading up to the crash.

“I just remember being in the living room, and I remember playing with my dog and sitting in front of the TV and hearing outside something loud,” she said. “It was just, like, rumbling, like a motorcycle, and it just kept getting louder and louder. … Before you knew it, everything was on fire.”

Those moments before the wreck were the last time she could remember seeing her mother.

Like many firefighters, Wes Vollrath would work second and even third jobs on his days off from firefighting. Nov. 9, 1989, on his day off from the Smyrna Fire Department, he was working as a paramedic when he saw the plume of smoke.

When Vollrath and Luxenberg met Saturday morning, he told her how she and her mother were brought to his ambulance badly burned, the skin still falling off their arms.

“She huddled you like this, and kept you from breathing the flames on the way out, and that’s probably what saved you,” Vollrath said, between sobs. “She looked out for you more than she did herself.”

Luxenberg hadn’t known her mother had been the one to bring her out of the fire.

“She was the hero, huh?” Luxenberg said, incredulous.

After the crash, her grandparents fought her father for custody, and won. She moved to New York. All told, she spent two years recovering — one in the hospital, in intensive care, the other in rehabilitation, re-learning fine motor skills, like using her fingers.

Meanwhile, her grandparents told Luxenberg her mother had gone to the angels. It took her awhile to realize she would never see her mother again.

“I didn’t have a lot of time to grieve because it was just, like, a fast track into recuperating, just surviving,” she said. “I think that the older I got, the more I missed my mom. When you have your own child, you’re like, ‘Wow, it would be nice to have my mom here.’ Or when you get married,” she added, her voice catching.

Luxenberg’s ex-husband, a firefighter, suggested in 2018 they connect with the firefighters who responded to the crash that almost took her life. Although he gathered some information at the time, it wasn’t until this year that she acted on the suggestion, after her sister made contact with a woman who was living in the building at the time of the crash.

Everyone agreed April 3 was the most convenient day for a reunion. It happened to be the day Padovani would have turned 60 years old.

Current Smyrna firefighters stood against the wall as Luxenberg and the men who had saved her recounted that harrowing night more than 30 years ago. After hearing stories from those who had retired years ago, she turned to the city’s current generation of firefighters.

“Firemen, you guys really take heat, and you have to have grit, and heart and love what you do to carry that equipment day in and day out,” she said, “and I’m a (testament), I’m an example of what can … happen when you do your job right.”