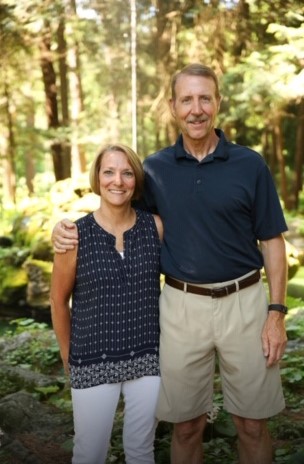 David Cook started his career with the Albany Int’l Airport Fire Department in 1991. He started as a firefighter/EMT, then as a shift Captain, and in 2000 he was appointed Chief of the Department. Since becoming Chief he has overseen the construction of the new fire station, upgraded a new fleet of fire apparatus, and implemented new test requirements for new firefighters. He started programs that required all new firefighters to become NYS/National certified firefighters and National certified ARFF firefighters. This consisted of attending 40hr ARFF basic school and the NYS recruit firefighter training program. He has been instrumental in receiving grant money to place AEDs throughout the airport terminal and other buildings on the airport. He also secured a FEMA grant for exercise equipment to be placed in the new state of the art firehouse work out room. He worked with Federal Express to acquire a retired Boeing 727 cargo aircraft used for training airport firefighters along with the surrounding fire departments.

David started in 1974 as a volunteer firefighter and is a life member with 45 years’ service, rising to the rank of Captain, serving as a driver training instructor, and was on several truck purchasing committees. In1975 he joined the US Air Force and served his time as a Crash Rescue Firefighter obtaining the rank of sergeant. Allen Ward has thirty-seven years’ experience as a firefighter and emergency medical technician, in the military, municipal, and private sectors. His military career as a firefighter spanned 24 WARD PHOTOyears. His is a military historian and author of the book, “Army Fire Fighting: A Historical Perspective”, detailing the history of Army firefighting from Civil War to present day. He has been employed with Rural/Metro Fire Dept., Inc., for 15 years, serving as an aircraft rescue fire fighter, fire captain, and fire chief at the Port Columbus International Airport. He currently leads the Specialty Fire Division, which is responsible for providing firefighting services to airports and industrial customers nationwide. 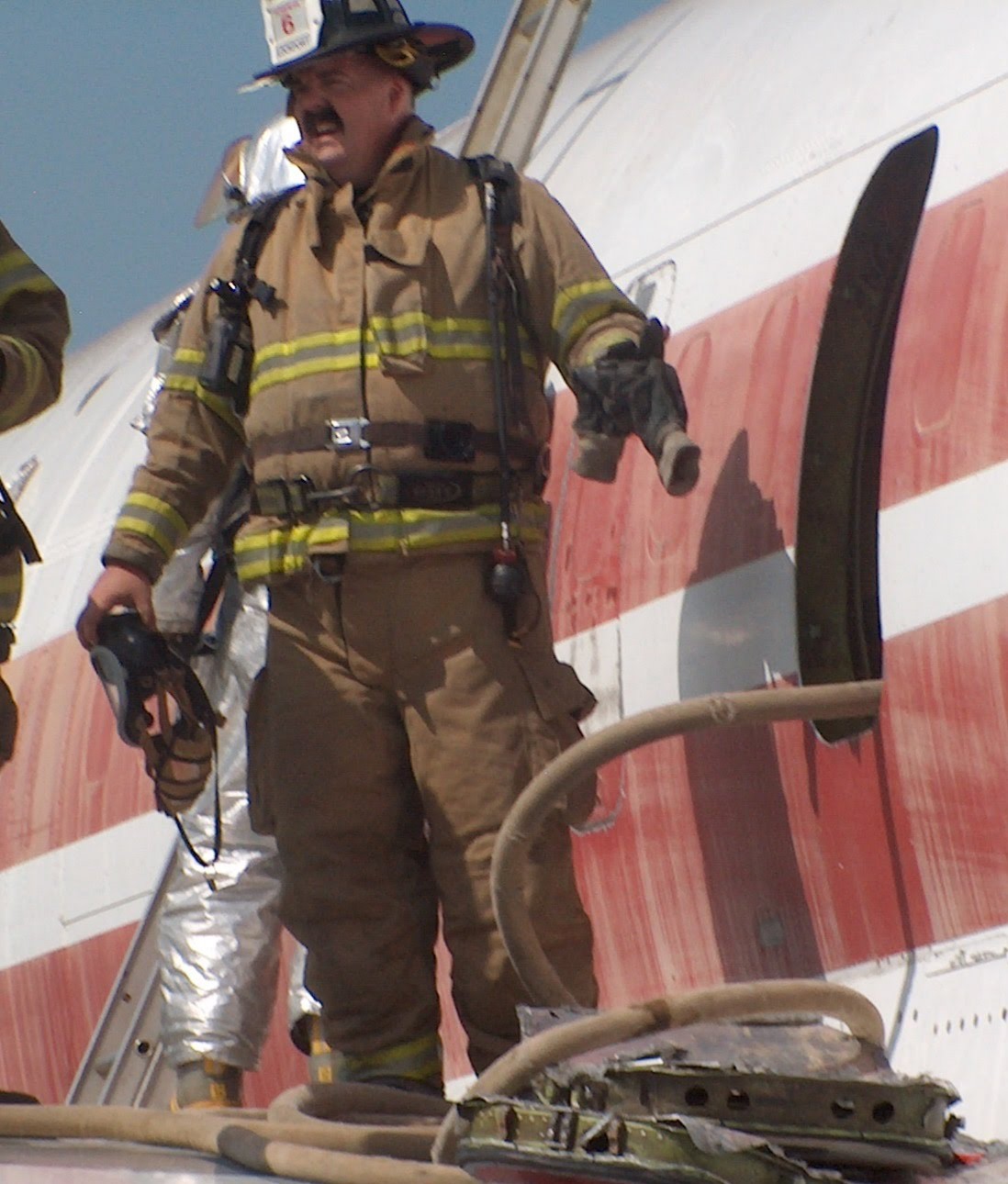 Michael J Lopina is a 31 year fire service professional who currently serves as Commander of the ARFF Division for Lockport Township Fire Protection District. He has served as Commander since instituting the ARFF Division in 2006. He has been involved with ARFFWG since 2007 and advocates for departments with General Aviation and Regional airports not subject to FAA 139 to have access to quality ARFF training and procedures

Ronald Krusleski joined the fire service in 1986 and became a member of the Houston Fire Department in 1990. He currently holds the rank of Senior Captain since 2006 and a paramedic since 1991. In March of 2008 he became the ARFF Coordinator for IAH and HOU airports. Krusleski holds certifications from the Texas Fire Commission as Master ARFF, Master Structure Firefighter, Fire Instructor, and Examiner. He served as a Fire Instructor at the Houston Fire Academy, taught paramedics for Houston Community College, and was a flight paramedic for Hermann Life Flight. 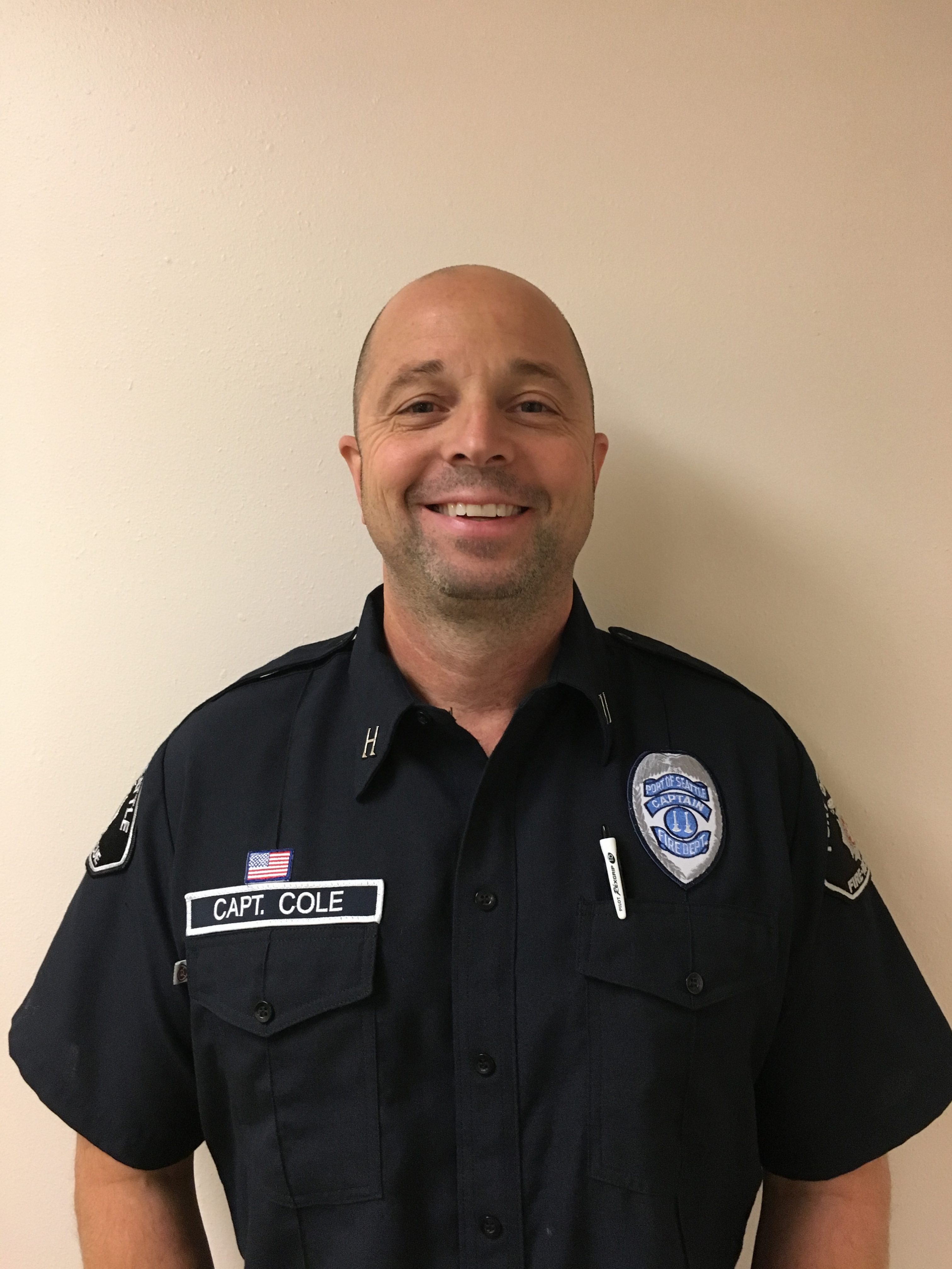 John has been married 17 years to his wife Rachel.  He has 16 year old son Johnny and a 14 year old daughter Anne.  John has spent 20 years in the fire service, 19 years with the Port of Seattle Fire Department.  He has been 3 ½ years as ARFF Training Captain.  John spent 24 years as a UH-60 Blackhawk helicopter pilot Army National Guard.  He had 2 deployments to Iraq.  John has a Bachelor of Science degree from Washington State University, Go Cougs!

Captain II Oscar Scott has been a member of the Los Angeles Fire Department for over 30 years.  He has held the rank of Firefighter, Firefighter Emergency Incident Technician, Captain I and for the past 11 plus years Captain II.

Captain Scott is currently the Fire and Life Safety Agency Representative – Liaison Officer for the Los Angeles World Airport (LAWA).  Captain Scott has served in this position over 10 years.

The following are examples of some of his duties:

Captain Scott’s previous assignments includes Westchester Fire Station 5.  He served in the capacity of Firefighter for over 3 years and as a Firefighter Emergency Incident Technician for nearly 6 years.  As a Firefighter Emergency Incident Technician he was part of the Battalion Command Team that was responsible for managing all fire stations from Venice to Westchester included LAWA fire stations and ARFF.  Captain Scott was promoted to Fire Captain I in 2006 where he would eventually come back to Westchester Fire Station 5 and server as Captain.

Captain Scott was born and raised in Los Angeles where he excelled in academics and athletics.  He is a people person that wanted to give back to his community.  He joined the Los Angeles Fire Department and dedicated his service to the citizens of Los Angeles.

Captain Scott has served the Westchester/LAWA community for nearly 20 years of his 30 plus year career with the Los Angeles Fire Department. 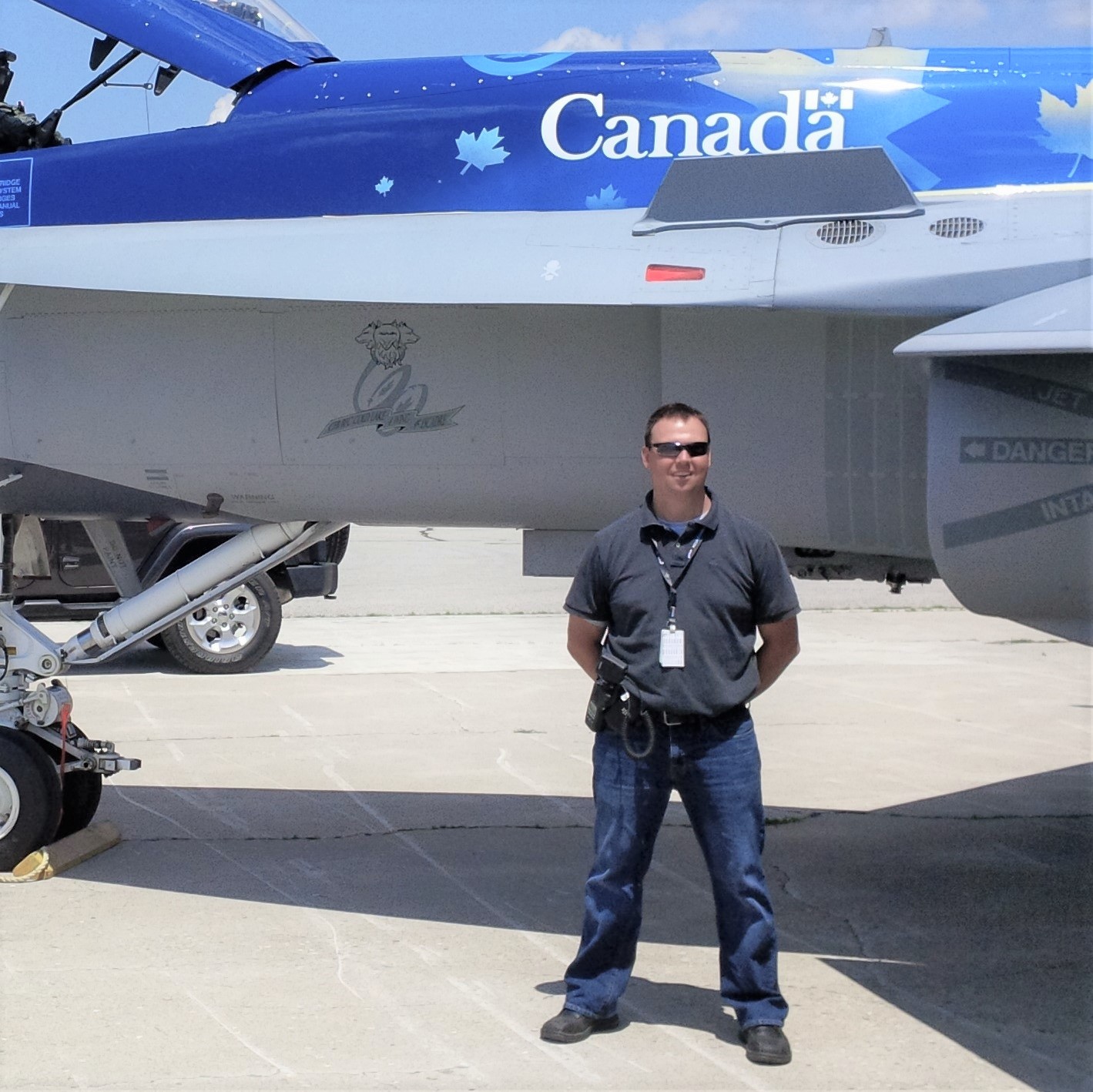 I followed in my grandfather’s and father’s footsteps and became a volunteer firefighter in Sudbury Ontario in 1997. In 2001 I was given the opportunity to join the ARFF team at the Greater Sudbury Airport (CYSB). After 9 years at CYSB I moved my wife and 3 kids to the Region of Waterloo in 2010 to take on the position of Supervisor, Airport Emergency Services and Training at the Region of Waterloo International Airport (CYKF). Since being in Waterloo I have volunteered my services with the Township of North Dumfries Fire Department, where I currently hold the position of Chief Training Officer.

I am currently under contract with the Province of Ontario’s Office of the Fire Marshal & Emergency Management, Academic Standards and Evaluation department as a Lead Evaluator for NFPA testing for firefighters looking to enter the fire service or expand their accreditations.

I hold multiple IFSAC and Pro-Board accreditations through the Ontario Fire College as well as certifications from Canadian Airports Online College and Sault College in Airport Administration and Operations.

I have been a member of the ARFF Working Group since 2010 and have taken advantage of conferences, training and networking opportunities provided over the past 10 years. 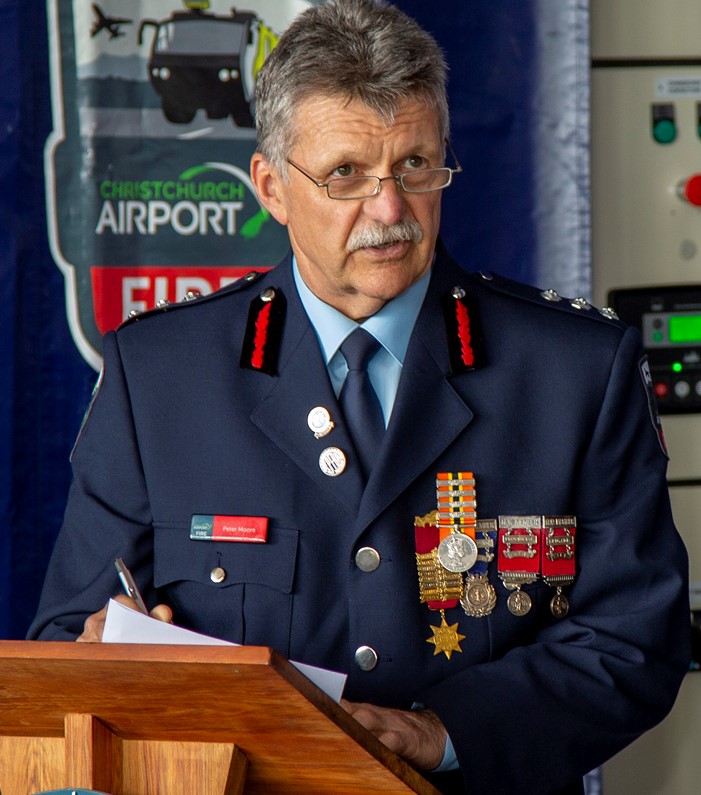 Peter joined his local volunteer fire brigade as an 18 year old and served there for 20 years, rising to Deputy Chief. During this time he signed up with the Christchurch Int’l Airport Fire Service where he has worked for the last 42 years and has been the Chief Fire Officer for the last 16 years. He also spent two years seconded as Manager, Rescue Fire Service, Rarotonga, Cook Islands where he oversaw the successful transition from expatriate control to local management. 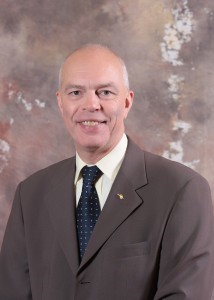 Lars Erlandsson has been in the ARFF industry since 1986. Before the ARFF experience Lars did serve in the Royal Swedish Army and in the Swedish Civil Defense. Presently he serve at Swedavia AB, Swedish Airports, as Manager Airport Academy and ARFF advisor to the company. He was a co-author of the Swedish ARFF handbooks and has experience of ARFF consulting and training internationally since the mid-90’s.  Lars served 6-years on the Board of Directors and three (3) of those as the Treasurer. 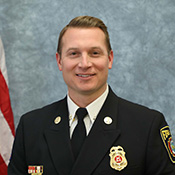 A member of the Fire Service industry since 2000, Captain Mitch Iles joined DFW International Airport in 2004. Captain Iles is the course coordinator and lead instructor for the Basic and Advanced ARFF courses, and all hands-on skills offered through the DFW Fire Training Research Center. Captain Iles also schedules and coordinates all research projects that are done at the FTRC. He is DFW Fire Department’s foam/PFAS subject matter expert. He currently holds a position on the AAAE PFAS workgroup, ACI/AAAE/NFPA Alternative Firefighting Agent Expert Advisory Group, and ARFFWG PFAS workgroup. He has certifications with the Texas Commission on Fire Protection as an Advanced Aircraft Rescue Firefighter, Advanced Structural Firefighter, HazMat Technician, Training Facility Instructor, and is an EMT. Captain Iles is a front-line supervisor bringing field experience into the classroom for all students. 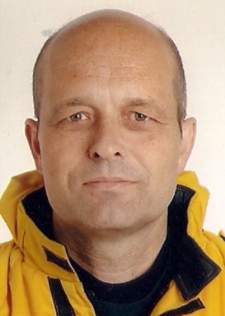